South Battery Park City Resiliency Project (SBPCR) will implement an integrated flood barrier system, stormwater drainage improvements, enhanced waterfront access, and expanded community and green spaces, extending from the Museum of Jewish Heritage through Wagner Park, across Pier A Plaza, and along the northern border of the Historic Battery. It will also elevate Wagner Park by 10 to 12 feet to protect against future storm surges and rising sea levels.

SBPCR construction is slated to commence this September and last for two years. The BPCA extended public comment on the Draft Environmental Impact Statement into June, and continues to solicit public input on the final SBPCR design. In August BPCA announced a 74% increase in planned green space for Wagner Park in response to feedback from community stakeholders. The community is working with their elected officials to make modifications to the final plan.

The BPC Ball Fields & Community Center Resiliency Project has completed construction on its 800-linear foot flood barrier system along the eastern, northern, and southern boundaries of the BPC Ball Fields.

The North/West Battery Park City Resiliency Project (NWBPCR) will connect to the SBPCR project at First Place, extending the integrated flood risk management system north along the Battery Park City Esplanade, across to the east side of West Street/Route 9A, and end above Chambers Street.

BPCA hosted an in-person Open House in June and a virtual Open House through July to gather public comment on the NWBPCR design. The next step for the project is to select the design build team and conduct environmental review this fall. Construction on the project is anticipated to begin in summer 2023 and be completed by the end of 2026.

Receive information on this and other Sandy resilience projects by signing up for the Rebuild by Design newsletter HERE.

Old design for Wagner Park and new design in response to community input. The community is working with their elected officials to make modifications to the final plan. Source: BPCA 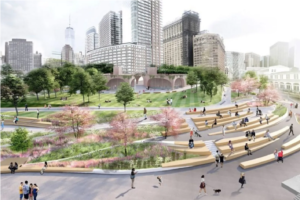 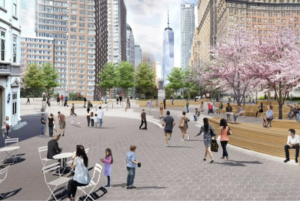 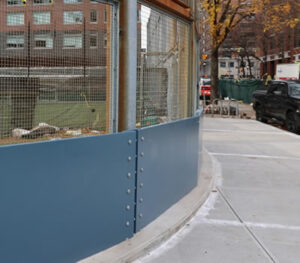 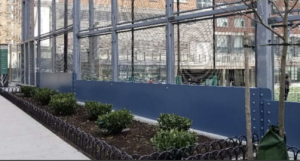